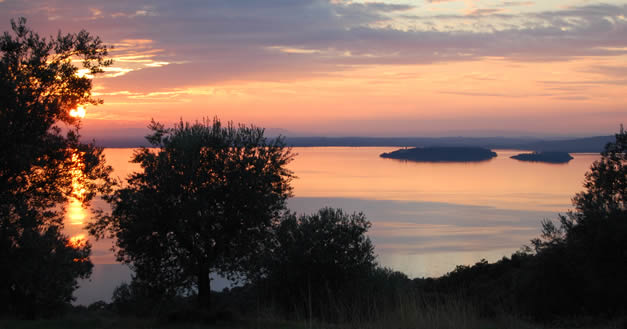 This region can offer, differently from the surrounding zones, all the environmental wonders and the tourist attractions that only a lake of remarkable size, such as the Trasimeno, can guarantee.
It is not by chance that the most important centres of this region, such as Castiglione del Lago, Tuoro sul Trasimeno, Passignano sul Trasimeno, and Magione, rise on its rivers and also the more distant villages, such as Piegaro, Paciano or Panicale, orbit around to this important pole of economic and tourist attraction. Perhaps only Città della Pieve for the unquestionable artistic treasures, escapes this law, according to which, the interest of the traveller focuses on the waters of the greatest lake of the center of Italy .

Traces of an ancient and painful history are not missing: the castles, the churches and the abbeys; the works of artists of great reputation, like those of Pietro Vannucci called the Perugino or those of Nicolò Pomarancio. For those who prefer relax in the natural surroundings, the beautiful excursions between the woods and the mountains can be suggested, from where a particular view as far as what concerns the Umbria region, can be admired.

A Lake to Sail
The islands and the cities of the Lake Trasimeno are perfectly connected through several shipping lines. From any point you go on board, there’s the possibility to visit many sites of artistic, historical, cultural and scientific interest.

A lake to see

ISOLA MAGGIORE: Rock of St. Francis Itinerary of the Jubileum.
CASTIGLIONE DEL LAGO: The Lion Fortress, Della Corgna-Palace
ISOLA POLVESE: The remains of the Fortress, the Church and the Abbey from the XII Century, Scientific and Educational Park
PASSIGNANO SUL TRASIMENO: Church of Madonna dell’olivo from the XVI Century, Church of S. Vito from the XII Century.
MAGIONE: The Castle of the Knights of Malta from the XV Century
SAN FELICIANO: Naturalistic Oasis “La Valle”, The Fishing Museum
TUORO SUL TRASIMENO: Permanent Documentation Centre of the Battle of Trasimeno and historic-archaeological trial of the battle Field of the Sun: Open museum of contemporary and international sculpted columns.

In the villages of the Trasimeno lake region it is still possible to find craftsmen dedicating with passion and according to tradition to the working of the metals. The struck iron, as an example, is used at City of the Pieve in order to realize splendid reproductions of ancient crews, while the way copper is worked, is a characteristic of the town of Magione. Also the lace, which is worked in a way called “Ireland peak”, has in the Isola Maggiore (the greatest island) and in the laboratory of arts panicalensis centers of great production. For what concerns the cuisine, beyond appreciating the wine of the hills of the Trasimeno, it is possible to taste the typical plates of the zone, obviously all made up of lake-fish. The carps are cooked in the firewood furnace following the same procedure used to cook the pork based plate called “Regina in porchetta “, while for “tegamaccio “, a kind of fish soup, all the fishes of the lake are boiled on olive oil, aromatic grass and wine white.

On the Major island of Trasimeno Lake, says I Fioretti (Chapter VII), S. Francesco fasted an entire Lent (in 1211 or 1213), “with only half a loaf”. There was now accompanied by a friend who was staying at and asked him not to tell anyone his hideout. He paused in the midst of “a very thick hedge and distressed”. The island was deserted, and when, at the end of Lent, the friend came back to retrieve it, the two loaves of bread that had given it found one and a half, the other half had eaten “out of reverence for fasting of blessed Christ, who fasted forty days and forty nights without taking any food material. And so, with that half a loaf drove by it the poison of vainglory”.